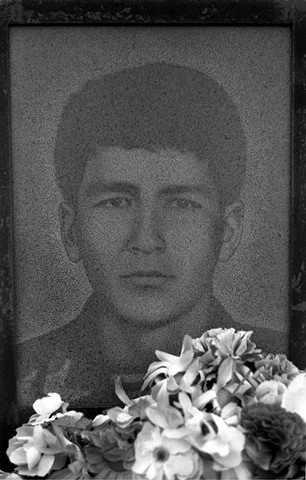 The grave of a young soldier who died fighting in the Nagorno-Karabakh conflict is marked by this etched marble stone. The fighting began as a border dispute between Armenia and Azerbaijan shortly after the collapse of the Soviet Union and eventually claimed the lives of approximately 30,000 combatants from both sides. A 1994 cease-fire agreement ended hostilities; however, land mines continue to claim lives. A vast majority of the Armenian casualties were young, inexperienced fighters who were sent to the front lines as part of their twenty-four month period of mandatory military service.